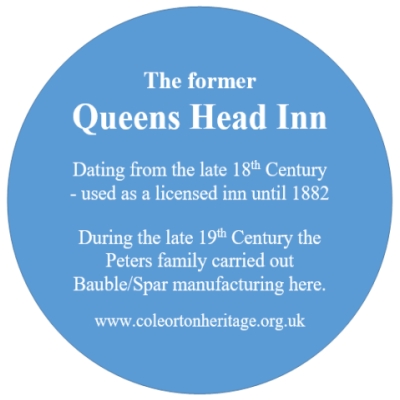 Believed to date from about 1780, the property had two fine cellars one of which has been subsequently filled in, but one of which is still in good condition.

The property was advertised for auction on 10th October 1831 in the Leicester Journal as follows:

To Be Sold by Auction by Mr J. Toone. At the house of Mr. F. Potter, the Queens Head Inn, in the parish of Thringstone, on Monday, the 10th day of October, 1831, at 4 o'clock in the afternoon precisely.

"All that house and bakehouse attached; also, two tenements and a chapel with convenient outbuildings, gardens, and about 1 1/2 acre, more or less, of excellent pasture land; the whole now in the occupation of Mr. Thomas Potter and his under-tenants. To view the above, apply to Thomas Potter, on the premises: and for further particulars, to the auctioneer, Baxter Gate, Loughborough."

The Baptist chapel referred to in this advertisement once stood on the opposite side of the road to the Queens Head and adjacent to the present redundant Baptist Chapel in the Rowlands (now a private residence), which was built in 1875. The earlier chapel appears to have been demolished some time in the early twentieth century and no sign of the building now remains. Exactly how a Baptist Chapel became incorporated into the messuage of a public house is not known.

Presumably the 1831 sale was not a success, since a year later the property was still in Mr. Potter’s possession when an auction of the chapel alone was advertised in the Leicester Chronicle of 28th July 1832 as follows:

"At Mr Potter's The Queens Head Inn in Thringstone on Wednesday 1st August next at 5 o'clock in the afternoon. All that building recently erected for, and now, for sometime past, used as a chapel or place of worship, by a society of the particular Baptists, situate near "Rowlands", in Swannington aforesaid, with the appurtenances thereto belonging. The property is capable of being converted into dwelling houses at trifling expense, immediate possession may be had.

It is notable that both of the sale details above refer to the Queens Head as being in Thringstone Parish. Prior to 1881 this may have been the case, since it appears in the Thringstone Parish Census records of that date. In other cases it seems to be referred to as being in Coleorton Parish, as for example in the Coleorton Tithe map. This ambiguity in its location may reflect its position at the confluence of Coleorton, Thringstone and Swannington Parish boundaries as shown in figure 1.

The 1842 Coleorton Tithe map shows the property as plot 390 and is described in the transcripts simply as a house and garden of 38 perches in extent (just under ¼ acre). At this time the property was in the ownership of Sir George Howland Beaumont, but the tenant is not stated. No mention is made of it being a public house in the tithe transcripts, nor is the Queens Head mentioned as a public house in the 1841 or 1851 census returns. Accordingly it is unclear if it operated as an Inn during this period. However, in 1856 the Leicester Chronicle of 6th December carries a report of an inquest at the house of Mr. Gough, Queen's Head, Coleorton, into the death of Thomas Moult, so we know it was definitely in business in that year and we know that Mr Gough was the landlord.

The 1861 Wright's Trade Directory for Coleorton lists Thomas "Birkin" as victualler, Queens Head, Moortown. The 1861 census confirms this and lists Thomas Berkin as innkeeper residing with his wife Sarah, his daughter in law (also Sarah) and his granddaughter Rosetta Berkin on the Moor1. In the 1871 census Thomas Berkin is described as a licensed victualler and farmer of 14 acres living at the Queens Head, Moor Town, Coleorton, but later in September of that year the licence was transferred to his son in law, James Peters2.

The Peters family were already well established as ornamental spar (bauble) manufacturers in Workhouse Lane where their workshop was the single story building adjacent to Heather Cottage. This business continued to be carried on at the Queen's Head alongside the pub business, since various trade directories describe James Peters and son (also James Peters) as licensed victuallers and spar manufacturers at the Queens Head over the next decade3. In 1882 the Queens Head ceased trading as a public house, since a report of Ashby-de-la-Zouch petty sessions in the Leicester Journal of October 6th, 1882 states: The renewal of the licence of the Queen's Head, Coleorton, occupied by James Peters, was not asked for, it being the wish of the owner that the same should be discontinued.

The spar manufactory at the property may have lingered on up to the end of the 19th Century, since the 1891 census records George E. Peters as spa turner in Moor Town, but there is no mention of the Queens Head since it was no longer a public house. Kelly's 1895 Directory also lists George Peters as spa manufacturer on the Moor, but by the 1901 census no mention is made of the Peters family or spar manufacture in Coleorton. 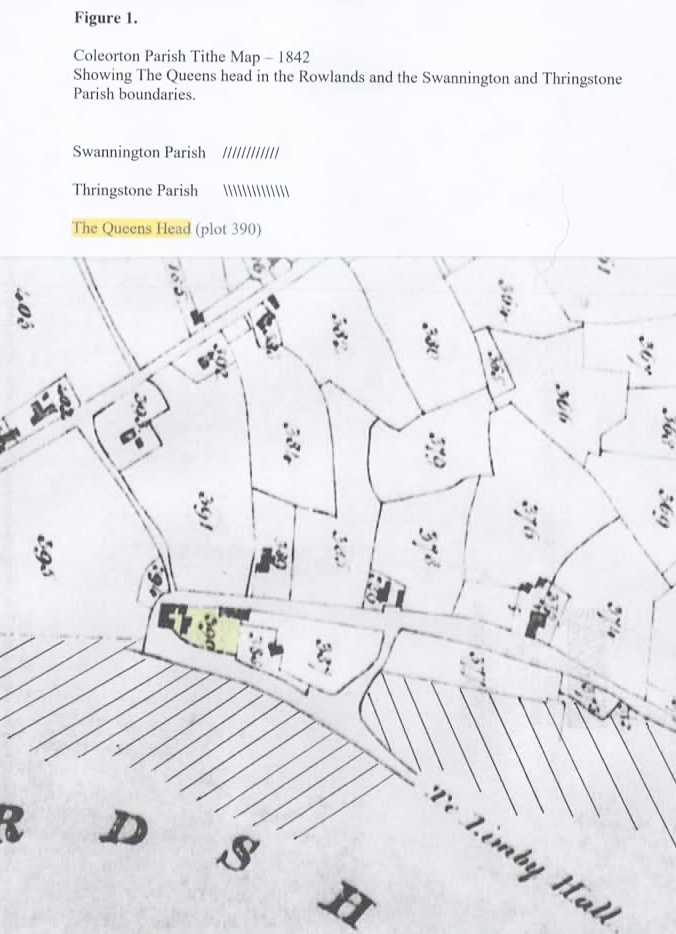 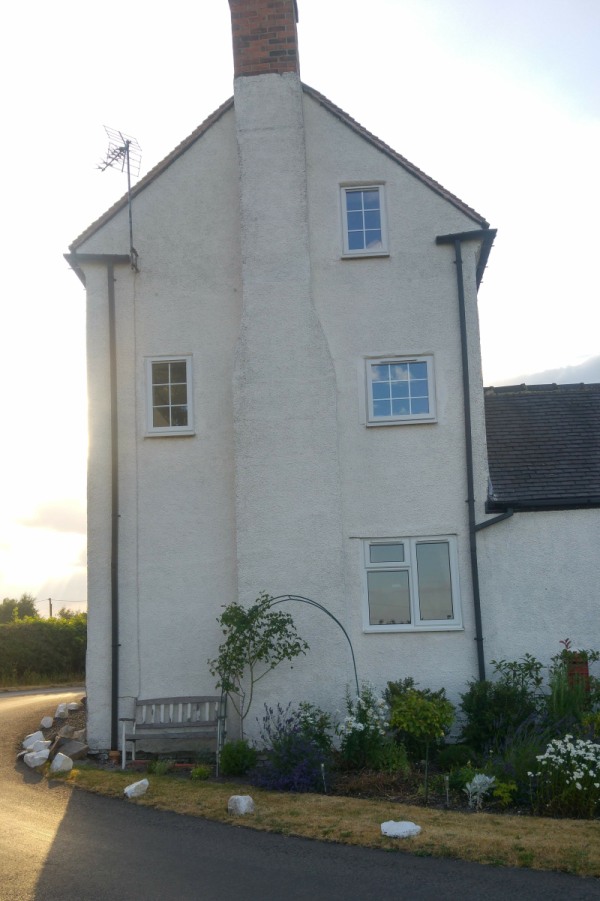 Side view of the former Queens Head today