Our house, Froggarts Cottage, is in School Lane, Peggs Green, currently within Coleorton Parish but which until 1936 was in Thringstone.

We moved into Froggarts Cottage in 2006, myself, my husband, two grown-up children and business from Tamworth, along with my mother up from Dorset. It was an ideal home for us having lots of space and an adjoining annexe where my aged mother could live comfortably close to family but with a little privacy. The previous owners, Hilary & Pat Howden, had transformed 4 small cottages into a family home around 1979 and added the annexe when they needed it for their own parents.

The cottages were originally built in 1860 for the Kidger family who lived in the big house opposite (now known as Yew Tree House, but previously The White House) and who ran a small abattoir and butchers shop in what is now known as "The Barn". Mr Kidger had various businesses including a share of Peggs Green mine which closed down in 1858. It’s said the cottages were built to house his abattoir workers. But records show they were originally 2 cottages – occupied by Mary Kidger and the other by Joseph Hickling. However, by 1883 they were occupied by 4 families - Davis, Barnett, Elliott and Grant (still owned by the Kidger family) and in 1932 by Bradford, Walker, Elliott and Grant families. The 4 cottages were at one time known as “Kidgers Row” but by the time the Howdens took over in 1978 they had become "The Terrace".

They were small, brick-built cottages – two up, two down – with outside loos ("thunderboxes") at the top of the garden. One still exists rather precariously and covered in ivy which we use as a garden store. Mains sewerage didn’t arrive until the early 1970s. Each of the 4 cottages measured 20ft from front to back and 12ft wide, 2 up 2 down, to accommodate whole families.

Interestingly for such a small building, the 4 cottages are on two levels – the front room being a step down from the back room, and as they are on the hill alongside the road, they step down from one cottage to the next.

The original cottages had straightforward pitched roofs. In order to raise the height of the ceilings the Howdens installed 4 dormer windows at the front. Although now rendered and painted, the original cottages were brick. They were solid brick, cavity walls not coming into general use until the 20th century, so they were probably quite difficult to heat. From the remaining chimney-breasts and flues in the house it would appear that each cottage had two fireplaces, one in each downstairs room. Probably the front rooms were used as the kitchen, although it’s likely that working families back then would have made use of the community bakehouses for any major cooking – the nearest probably in what is now Aqueduct Road. They had access to water from a well in Froggarts Lane.

School Lane had various names over the years. Certainly in 1920 it was called Froggarts Lane. For a long time the lane did not join with Top Road as it does now. When the Howdens purchased from Mrs Kidger, the stamped conveyancing document dated Feb 1978 describes the property as "parcel of land situate in School Lane (formerly Froggarts Lane)". In 1946 the will and probate of one Phoebe Hallam shows her resident at Froggarts Lane, Peggs Green. Other names on record are "Occupation Road" which included Clay Lane, Kidgers Lane (in 1901) and "Froggatts Lane". There was a Froggatts Lane across the other side of Top Road and which was a toll road through to the Melbourne Turnpike – now Zion Hill. So it's possible there were some transcription errors – but there are several official documents with the Froggarts spelling, including sales documents for the cottages that became Froggarts Cottage. 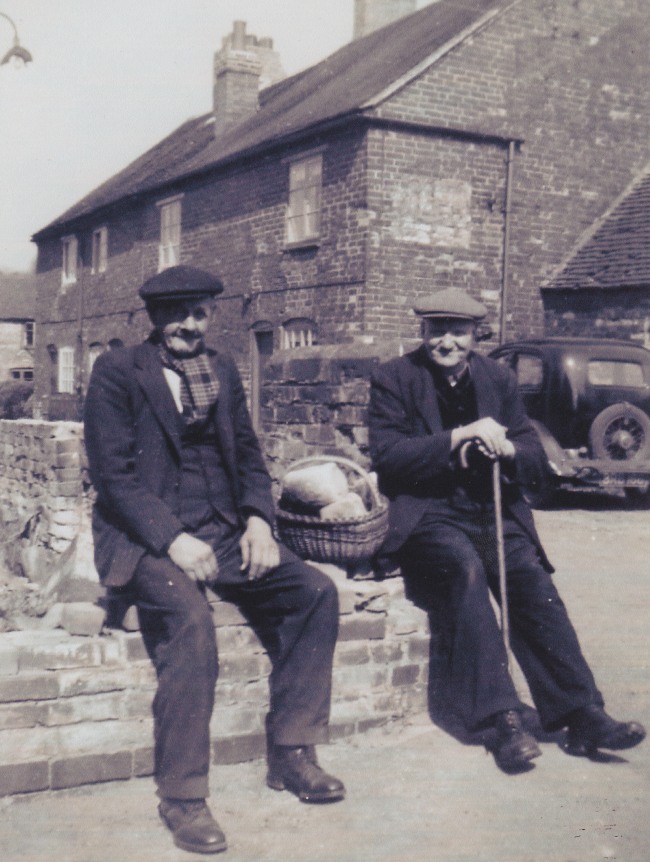 Two gentleman having a break sitting on Richards the Bakers' wall. The Terrace is on the other side of the road. c1960s. More about Richards Bakers & Grocery Shop >> 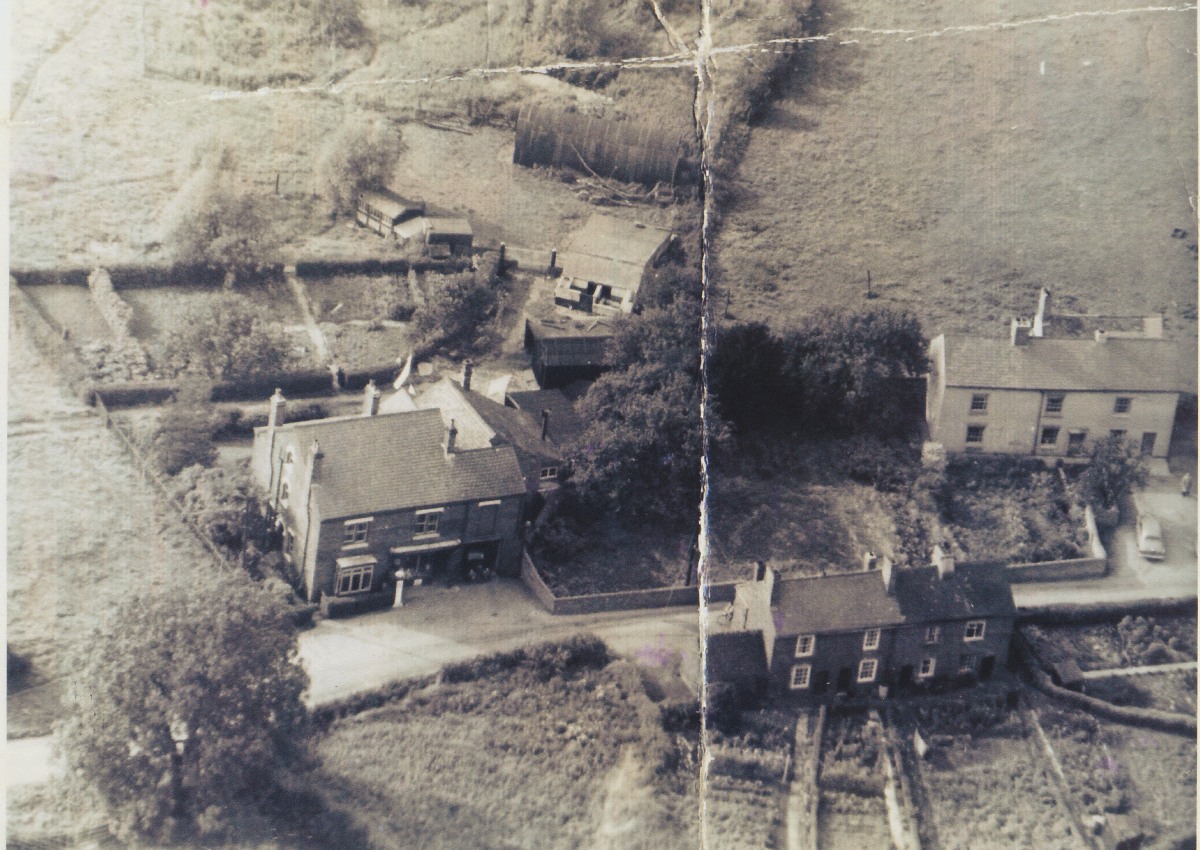 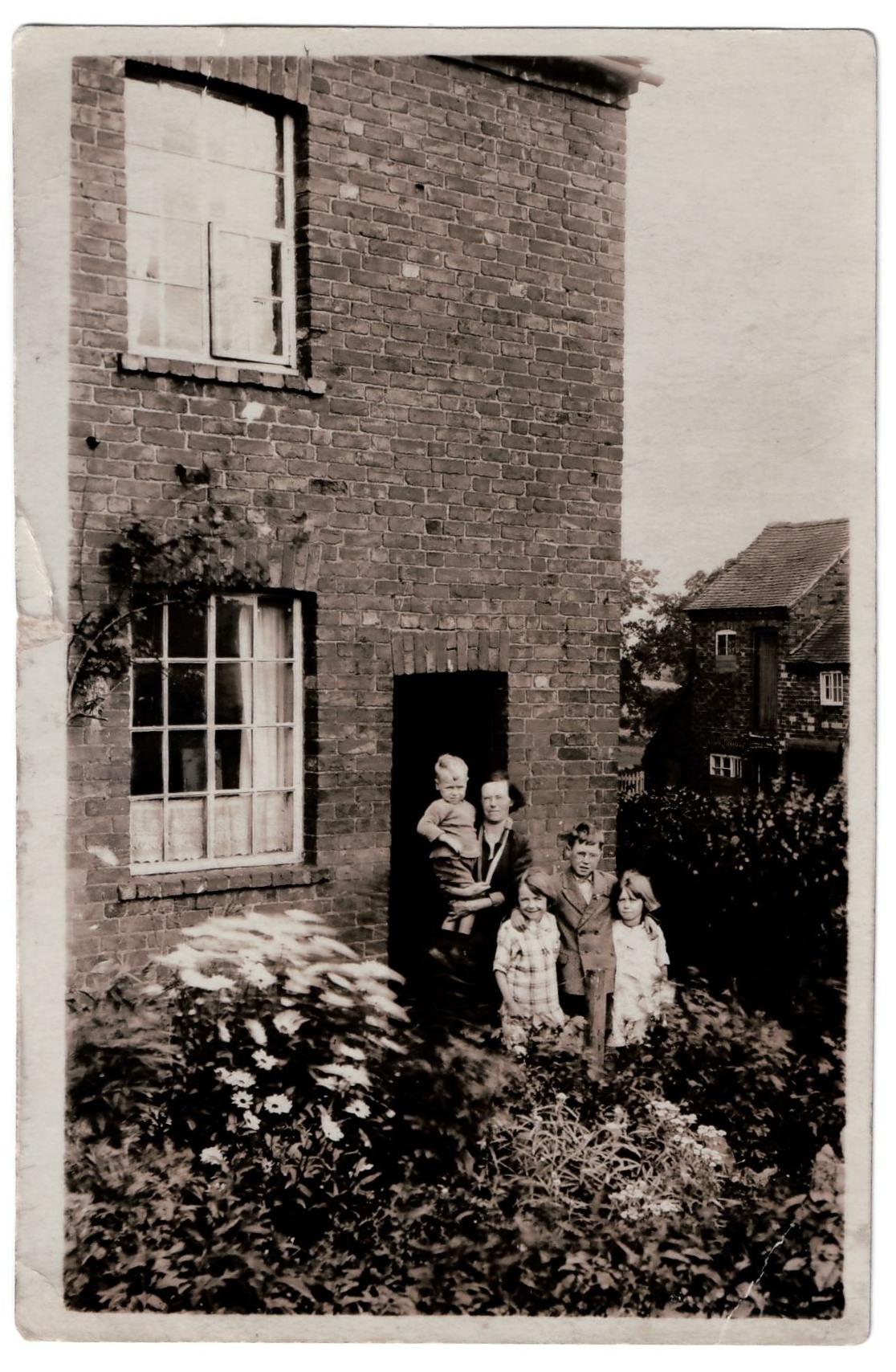 Elliott family outside back of cottage around 1930. See Kidgers slaughterhouse and butchers in the RH background. 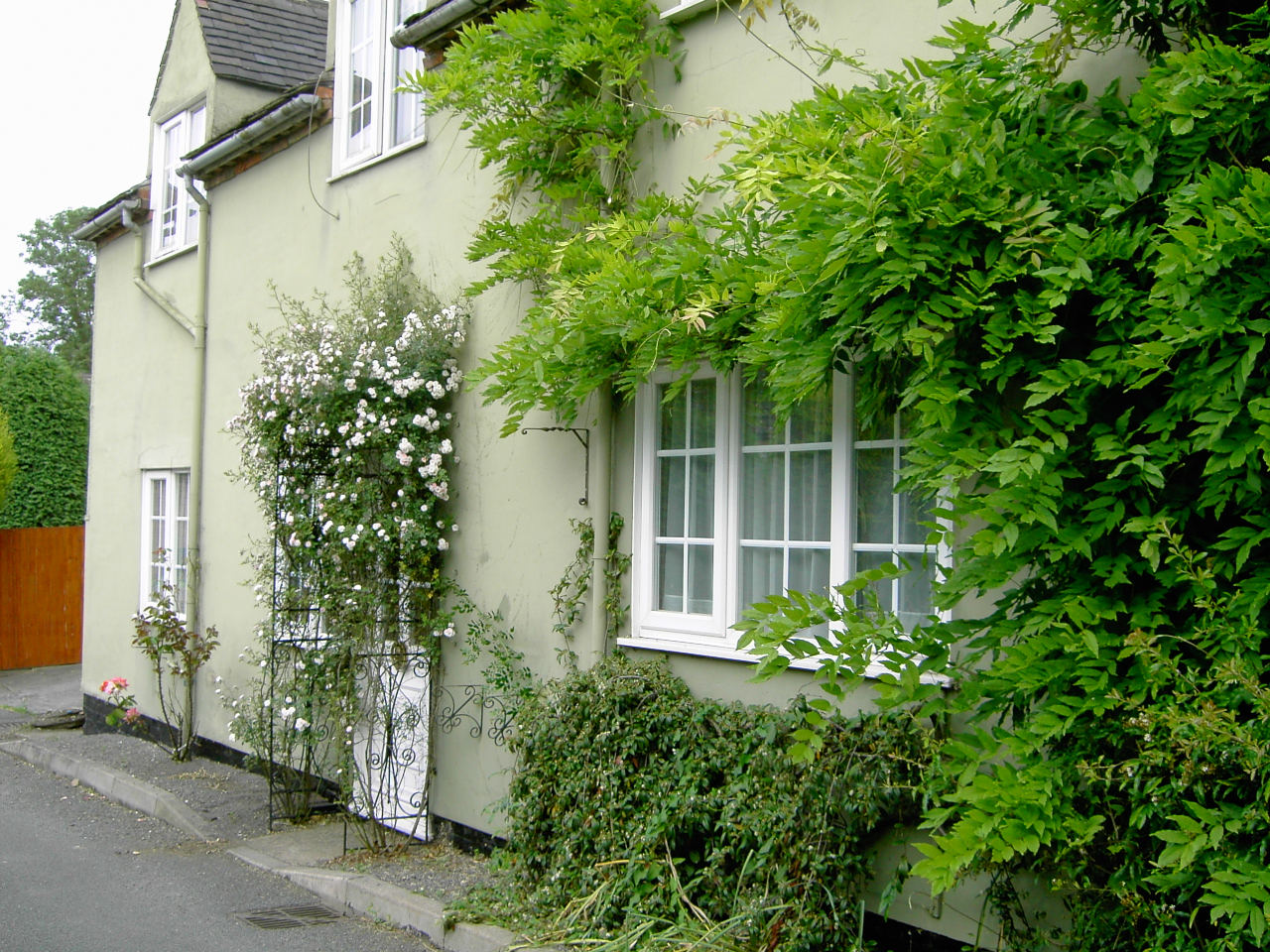