Article by Terry Ward of the Coleorton Heritage Group

In the early years of the 19th century Great Britain found itself threatened by invasion from France. Napoleon had massed a great army (the Armee d'Algleterre) of 200,000 men at Boulogne in sight of the British coast and a fleet of 2000 or more ships and barges to transport it across the channel (interestingly invasion by latest technology of the day, troop carrying balloons, was also considered). In Britain rumours of massive French invasion rafts powered by windmills and secretly dug French tunnels underneath the channel spread across the nation. It was to meet this threat that the volunteers of 1803 were raised and at their height in 1804 they numbered 480,000 men.

At this hour of their nation's need the yeomen of Coleorton were not found wanting. So it was that volunteer Captain William Willis Bailey, a mining engineer, was to raise the Coleorton Volunteers, a force consisting of over 100 men. Their formation was announced in the London Gazette of November 1st, 1803 No. 15683, with the officers listed as William Willis Bailey esq. as Captain, Robert Piper and Robert Boultbee gents. as 1st and 2nd Lieutenants and Thomas Kidger gent. as Ensign. A full list of all the officers and men (a total of 128 individuals) is present in the appendix to this article. Were your ancestors among them?

In 1803 the volunteers appeared to have mustered on a total of 20 days and were paid 1s/day (hence the term the Queen's shilling) amounting in total to £128 for the year.(see footnote 1) A further expenditure of £128 was made on 'clothing'. Captain Bailey was obliged to sign for the sums expended as shown below, the wording suggests he may have been expected to meet the initial clothing costs from his own pocket and claim it back from the War Office. These returns indicate that some form of uniform was provided but I could find no further information on exactly how these men were equipped.

"I do hereby Certify, upon my Word and Honor, as an Officer and a Gentleman, that I have carefully examined the Particulars of the foregoing Pay-List and Return of Sums paid amounting in the Whole to one hundred and twenty eight pounds and that to the best of my Knowledge, Information, and Belief, I find them to be truly and justly stated, and do accordingly hereby declare the same. Wm. Willis Bailey Captain.

I do hereby Certify, upon my Word and Honor, as an Officer and a Gentleman, that Clothing has been actually delivered to one hundred and twenty eight Non-Commissioned Officers and Private Men, composing the Corps under my Command, for the year 1803 and I accordingly claim the Allowance for Three Years, of One Pound per Man, making the sum of one hundred and twenty eight pounds. Wm. Willis Bailey Captain"

In the end the volunteers never saw action, the invasion plan was thwarted by Napoleon's inability to secure control of the English Channel and in August 1805 the Armee d'Algleterre broke camp to be deployed elsewhere. Finally following the battle of Trafalgar in October 1805 Napoleon's naval might was destroyed and with it any further ambitions for the invasion of Britain. With the passing of the threat of invasion the volunteers were disbanded in 1806 and no similar volunteer army would be raised again until 1858. 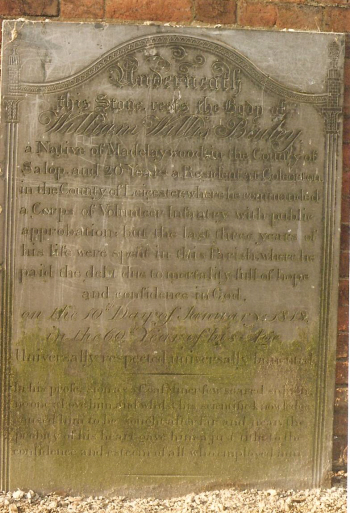 "Underneath this Stone rests the Body of William Willis Bailey a Native of Madelaywood, in the County of Salop, and 20 Years a Resident at Coleorton in the County of Leicester where he commanded a Corps of Volunteer Infantry with public approbation: but the last three years of his life were spent in this Parish, where he paid the debt due to mortality full of hope and confidence in God on the 10th Day of January, 1818, in the 60th Year of his Age. Universally respected, universally lamented. In his profession as a Coal Miner few soared so high. No one above him and whilst his scientific knowledge caused him to be sought after far and near, the probity of his heart gave him a just title to the confidence and esteem of all who employed him."