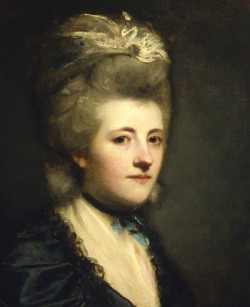 Margaret Willes was born in 1756, during the reign of George III, daughter of John Willes of Astrop, Northamptonshire, near Banbury and grew up in a happy family with her brothers and two sisters. The family were fairly literary and artistic and it was at a play reading in Astrop that she met her husband Sir George Howland Beaumont 7th Baronet of Stoughton Grange.

They married in Grosvenor Square, London, on 6 May 1778 when George was 25 and she was 22 and became Lady Margaret Willes Beaumont. This was obviously a marriage for love rather than for family connection or money and they lived together closely for almost 50 years until George's death in 1827.

The portrait of Lady Margaret above was by Joshua Reynolds in 1780.

Sir George had been educated at Eton and New College, Oxford, and studied drawing and became a pretty good artist and a collector of art. Margaret also drew and painted in oils. He had inherited the Baronetcy (of Stoughton Grange) in 1762 at the age 9. When they married Sir George and Lady Margaret lived at the Beaumont family home at Dunmow in Essex and they divided their time between Dunmow and London.

Margaret inherited No 34 Grosvenor square in 1785 and filled it with art and books and entertained artists and poets. Margaret’s interests were mostly in literature and she read in Latin, Greek and French. She was a voracious reader of philosophy and religion and when Sir George was busy as a member of parliament in 1790 took lessons in mathematics.

After they married they travelled together throughout Europe (inc the Grand Tour) and also visited the Lake District. They became great friends with William Wordsworth and his wife Mary. The Beaumonts visited them in Dove Cottage in the Lake District and there met Samuel Taylor Coleoridge and Robert Southey (The Lake poets).

Sir George and lady Margaret decided to live at the Coleorton Hall around 1800. They were a social couple and loved having their literary and artist friends to stay. So after deliberating changes to the existing Hall they decided to demolish it and build a new house on the same site - designed by Charles Dance - which would make the best of the views over Charnwood and house a picture gallery for Sir George's growing art collections.

The Wordsworths came to live at Coleorton - at Hall Farm while the new house was being built. Margaret helped Wordsworth appreciate landscape and nature which was reflected in much of his works. The Wordsworth household consisted of William, wife Mary, sister-in-law Sara Hutchinson and sister Dorothy (also a writer) plus 5 children. Also tagging along was Samuel Taylor Coleridge, who had an unhappy marriage, and sometimes his children. He also had a yen for Sara which was not received well.

Lady Margaret Willes Beaumont was a tremendous Letter-writer and socialiser. She encouraged the artists and poets among her friends, and supported them through hosting soirees and networking. Sometimes also financially. She was a supportive wife (but not a door-mat!) who enabled her husband to enjoy his artistic endeavours but she herself also drew and painted.

Margaret helped William Wordsworth develop his love of the natural world which so shaped his poetry writing: see the poem "A Flower Garden at Coleorton Hall" >>

Margaret and George had no children, and she clearly loved the company of children. The Wordsworth brood and also Coleridge’s children Hartley, Derwent, and Sara who sometimes accompanied him to Coleorton.

However, after her death the Western Times reported in September 5th 1829 under the title of "Anti-Population Mania":

Lady Beaumont, who died a few weeks since, at her seat in Coleorton, near Ashby-de-la-Zouch, ... used to make a practice, for the purpose of impeding the increase of the population, to reject all candidates for farms, or other situations in her patronage, who had large families of children, and even those who had lately married, if there appeared a probability of a numerous family. She even went so far to call as to call on some of her tenants and tell them that she would dismiss them from her estate, if they had any more children; and she compelled a school master and his wife, whose situations were in her appointment, to sleep in different bedrooms, and threatened them with the loss of their situation, if they had any more children.

Margaret was a great reader of philosophical works and The Beaumont's moved amongst the most influential thinkers of their day so she may have been influenced by Revd. Thomas Malthus' publication in 1798 of his theories on the relation between population growth and famine!

The school-master and wife referred to in the newspaper were Lucy and John Beckwith who moved from Castle Hedingham, Essex in 1820 to become headmaster and headmistress of the Beaumont Endowment School in Coleorton which was the school and alms house set up with the endowment from the last Baronet of Coleorton in 1702. Regardless of Lady Beaumont’s admonishment they went on to have 11 children although only 5 were born before Lady Margaret died. So I guess they just carried on doing what comes naturally! The youngest, George, was born when Lucy was 44. More about Lucy & John Beckwith >>

The above was part of a talk given by Sandra Dillon to the Coleorton WI on 8 January 2020 "The Women of Coleorton, how local ladies made our village what it is today".

More information about The Beaumonts: