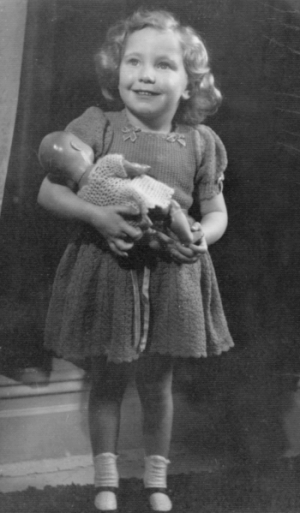 When I was a little girl in the 1950s, Friday night was "Whitwick Night" which meant a visit to my paternal grandparents Ernest and Mary Massey in Church Lane, Whitwick.

We would arrive about 7.00 pm, and the table would be set for my grandfather's supper. He was a deputy at Snibstone Pit and worked nights. Friday was also the local market day and we would sometimes buy him ‘chicklings’, not sure what they were but he loved them.

After supper Granpy would get ready for work, Gran having packed his "snap tin" with food to eat down the pit. He would also collect his watch, which he kept in a small tin (to protect it from dust). He also collected a handful of sweets to slake the dust in his throat.

We would drive him in our car, arriving about 10ish and park in the pit yard. The first building you would see was the Powder House, a large long building where the miners collected their detonators to take down with them. This building had thick rubber mats on the floor, presumably to stop sparks from the men’s boots. I would go with Granpy to the Lamp Cabin, where he was given a tally with his personal number on. The men handed these in before they went into the cage that lowered them down in to the pit. This was a record of how many went down and was collected from them when they came back to the surface. He would also collect his lamp from the Lamp Room. This was not only to light his way in the darkness, but would also alert him to any danger from the build up inflammable or toxic gasses which could lead to explosions.

Some nights we would walk with him to the cage that took men into the bowels of the earth. I saw his little hut where he sat and checked the men for anything like matches that might be dangerous. I even went into the ‘Winding Room’ where the large wheels worked the cage.

The Highlight of all this was at the end of the week when I would go on the bus with Grampy to collect his wages. We would walk to the far end of the yard where there was a building with an open window. The men would line up, I think they gave their tally number as identification, to be given their wages. We then went over the road to the canteen and Granpy would get me an orange juice and a cake, then homeward bound.

To all you ex-miners that might read this, please bear in mind that they are the memories of a little girl.

If you have memories of growing up in Coleorton we'd love to hear them. Please email heritagegroup@coleorton.org.uk or phone Sandra on 01530 440000.