The Jordan family came from a long line of Publican/Butchers dating as far back as the 1600s.

Memories of Gillian & Lyn, the granddaughters of the Jordans who ran The George Inn about 100 years ago

The George Inn (at one time "The Rose and Crown") was originally owned by the Beaumonts, belonging to Sir George's estate and from on or before 1908 it was rented by the Jordan family. Grace Elizabeth (Lizzie) Jordan was the licensee. They were tenants before this time. Grace and her husband Harold ran a butcher's business alongside the public house and their granddaughter Gillian remembers talk of ham and meat hanging from the hooks in the public bar and the grease/fat dripping on to customers. The public bar at that time only had benches on either side where the local miners would sit. A horse and cart was used to deliver the meat. The Jordans ran The George until the 1930s. They also used the paddock behind the current art deco house opposite. Grace & Harold are buried in the graveyard of St John's chapel (just inside and to the left of the gate). 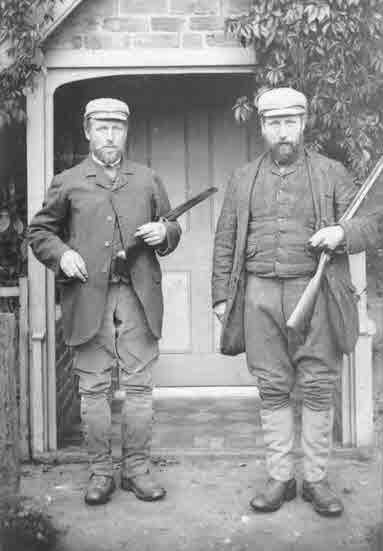 Jordan brothers Harold and Harry outside the George