Our family moved to Peggs Green, Coleorton, 12 years ago. It seems like yesterday! We’ve really enjoyed it here and are impressed with the lovely people, not just immediate neighbours, but everyone we've met in Coleorton through social gatherings like the Beaumont Trust coffee mornings, Heritage Group meetings and so on.

I'm so grateful that we were made welcome when we came here not knowing anyone at first.

I wonder if Lucy and John Beckwith had a similar welcome when, in 1820, they moved from Castle Hedingham in Essex to become headmaster and headmistress of the Beaumont Endowment School in Coleorton. At that time the school was located in the Alms Houses which housed widows from the parish as well as the school. The pair were both just 23 years old, having married 4 years before on 7 January 1817, so it must have been a big undertaking and adventure to move up north away from their families. There were no other Beckwiths in Coleorton at that time.

The school and "hospital" (the alms house for widows) were funded by a trust set up by Viscount Beaumont of Coleorton Hall in his will in 1701, with the mission to teach local children to read and write free-of-charge. The Trustees built the original Alms House in 1702 with eight rooms on the ground floor, six for the widows, two for the schoolmaster, and two large rooms above, one for the boys school and one for the girls. Each of the schoolrooms could accommodate 60 children.

In 1820 John Beckwith, as master, received an annual salary of £65, an allowance of 12½ tons of coal and occupied the rooms rent free. He was expected to instruct as many children from the parish as the rooms would accommodate. The children had to be over 6 years, and not many stayed beyond the age of 12. They would have been needed in the fields or to help with home-based occupations. In 1839 there were 50 boys and 40 girls registered, although the average was said to be 60 boys and 50 girls. The girls were taught by the Lucy whose services were paid from within her husband's salary. The charity funded all books and stationery.

This is an engraving by S Shaw which shows the School and almshouse building in 1794 - quite an imposing building.

Of course the School House and Alms House (or hospital) they worked and lived in were not those we see today. The current Viscount Beaumont's School was built in 1867 paid for by Cannon W B Beaumont and the Alms House was rebuilt, which we can see at the junction of Rempstone Road and the A512.

The Beckwiths obviously settled in well, because even with their busy schedules teaching the children and managing the Alms House they had 11 children; the youngest, George, was born when Lucy was 44. Can you image such a large family living in the two rooms they were allocated, even though the older ones had moved away or were married by the time the later additions arrived. 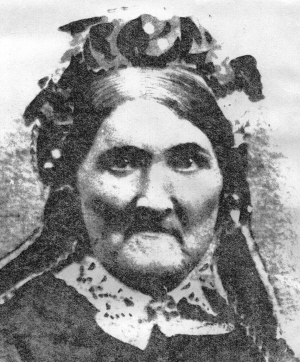 Lucy Beckwith had a reputation as being a fierce disciplinarian (necessary with the large class sizes then!) and would remove a whalebone from her stays to punish unruly girls.

The Beckwiths obviously took an interest in their pupils after they left school as in 1831 John wrote a letter to Berkshire Magistrates, signed also by other notaries, petitioning for clemency on behalf of Edward Moon, a former pupil at the school, sentenced to death for housebreaking, with the result that the sentence was commuted to transportation for life.

The Beckwiths continued at the school until 1857 when William Briggs took over as schoolmaster. By then John and Lucy were approaching 60 and had spent 37 years teaching the youngsters of Coleorton and managing the Alms House and resident widows.

When they started in 1820 King George IV had just ascended to the throne, followed ten years later by William IV and in 1837 by Queen Victoria.

They "retired" to live on The Moor (in what is now called Haywood Cottage) where they worked a 23 acre farm and a grocers shop. They had some of their family still living with them and assisting with the business and also a servant who may have helped on the farm as well. 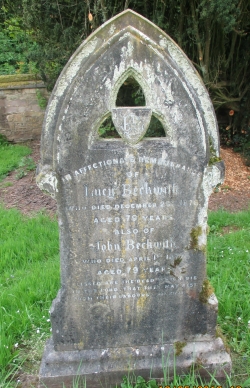 What happened to the 11 Beckwith children?

The oldest Ann (Annie) worked and lived at Coleorton Hall as a domestic servant for a while and lived with her parents for the rest of her life, unmarried.

The 1841 census shows William Stamford Beckwith was working and living as a gardener in Farm Town. He died aged 25 in 1848 and is buried in St Mary's churchyard on the East side of the church.

Second daughter, Emma, married a gardener from Northampton and later moved to Mickleham in Surrey. Emma had seven children of which at least one died in infancy. She and her husband lived till they were 78.

James married and became a brewery clerk in Burton on Trent. They had a son who was also a brewers clerk.

Eldest son, John, married Ann, a woman 24 his junior. They appeared to have no children. In the 1881 census at 54 he was a retired Inn Keeper, living on The Moor in Coleorton. In 1891 he was a widower, a retired farmer living with his sisters, Annie and Mary Ann.

Charles was a time keeper and bookkeeper and later a railway clerk. He married Sophia, and lived first in Narborough and then East Street in Leicester. They had no children.

Frances married an army school master, Thomas Walker, whose family came from near Stoke on Trent. Army postings took them to Malta and to Keurracher, India. They had 4 children. Frances died at the age of 43.

Mary was a dressmaker, didn’t marry and continued living at Coleorton. Note that the early census records were very vague about addresses. Individual houses weren't recorded, so we don't know if family members lived all in the same house or next door or down the road.

Edward married Rose Caroline Daniels on 3 March 1859 and had five children. They lived in Swannington and Whitwick.

The youngest child George married Mary Cross from nearby Derbyshire in 1862 but had no children. George kept the books for his father’s farm, and subsequently worked as a baker and a grocer and later a colliery clerk. They lived with his brother and sister in law, Margaret and George Green on The Moor in Coleorton.

There are no longer any Beckwiths in Coleorton, but the descendants of Lucy and John have spread across the country and indeed the world. The descendants of son Edward are living in British Columbia, Canada, and have sent details of their research into the Beckwith family which have helped me with this short story. (So if you are a Beckwith or related we have more history and could maybe put you in touch.)

Thanks, too, to other members of the Coleorton Heritage Group for their contributions.