As I was walking along Moor Lane (once known as Workhouse Lane) in Coleorton, my eye was attracted to some small fragments of white stone, recently thrown up during ditching work. As I picked these fragments up I was reminded of an industry once common in the area but now forgotten, the bauble industry. The Collins Dictionary defines a bauble as a "trinket of little value" and today the term is most often applied to the glittering decorations applied to Christmas trees. However, in the 19th C the term bauble was also applied to small ornaments fashioned from "Spar", a term used in the industry for alabaster, a form of gypsum. The material would have been quarried at Chellaston in Derbyshire. Chellaston, had been noted for production of alabaster for Church tomb ornaments from medieval times, but in the 18th and 19th C its major use was as plaster in the pottery industry with between 800-1000 tons mined yearly.

The stone would have been delivered to Coleorton in large blocks, which were then cut into more convenient sections ready for turning on a treadle lathe into candle sticks, egg cups, tobacco boxes and trinket boxes etc. More elaborate items would be constructed from smaller turned pieces glued together with a mixture of spar powder, resin and egg white to form watch stands, ewers and "novelty views", sometimes known as "peep eggs" containing printed pictures behind a magnifying lens within an elaborate frame. The bauble would then be finished by being warmed and waxed and finally polished with fuller's earth. Occasionally some items, especially those of poorer quality, would be painted presumably this might have been done to disguise defects. The market for these items locally would have been limited, but a ready market existed amongst tourists as exports to the newly developing seaside resorts and more locally at Matlock, Buxton and Mount St Bernard's Abbey.

On Workhouse Lane the bauble trade was carried out under the auspices of the Peter's family. White's Directory of 1846 lists James Peters as an ornamental spar manufacturer in North Street Whitwick, and by the time of the 1851 census he is recorded as employing five men in the business, there is evidence that he combined this with the business of publican, possibly at the "The Royal George" or "The Duke of Newcastle". However, by the end of 1851 his business seems to have been in trouble and he petitioned the County Court for protection from bankruptcy*. It may have been this event that persuaded him to move his business to Coleorton, since by the time of the 1861 Census he was resident on The Moor, Coleorton together with his family and is recorded as a spar manufacturer also employing his sons James and Thomas in the business. Although the Census does not give a specific address it is likely the business was being carried out in Workhouse Lane Coleorton. The workshop premises, still known amongst some today as "The Bauble Shop", were what is now No. 47 Moor Lane opposite to Moor Lane Farm. The modern farm buildings stand on what was once the site of a row of cottages once known as Spar Cottages, suggesting they were also connected to the Bauble industry in some way, perhaps as accommodation for the Peters’ family. Around the turn of the 20th Century these cottages were bought by a Welshman and re-named appropriately enough as Aberystwyth Terrace, the original cottages have since been demolished to make way for two new houses. In the 1871 census the business is still being carried out by James Peters on the Moor with his younger son John recorded as Spar Turner and his wife Sarah as a Spar painter. At some time in the 1870's James Peters seems to have moved his business to the nearby Queens Head public house standing at the junction of Workhouse Lane and The Rowlands where Wright's Directory of 1880 records him as Spar Manufacturer and Licensed victualler. In 1882 James Peters at the age of 69 gave up the license to the Queens Head which ceased trading as a public house from then on, it is probable that about this time he may also have given up the spar business, since by the 1891 census he is recorded as a widower, living on his own means, but still in resident at the former Queens Head together with his married daughter Clara Shaw and her family. However, his younger son George Peters was still carrying on the business in Workhouse Lane and employing two spar turners Charles Hodson and George Howson. This business was still going in 1895 when Kelly's Directory recorded George Peters as Spar manufacturer on The Moor, but this is the last record of the business in the village.

After the industry ceased, I am told by local resident Mr Alan Webster, that the redundant "Bauble Shop" found use as a reading room and even, despite its small size, for social events such as dances. It was eventually converted into a dwelling and in 1939 was known as ‘The Nest’ and was occupied by Wilf Lord and his family. In times past children in the village would collect waste spar fragments for use in chalk hopscotch squares and as decoration for the graves of beloved pets. 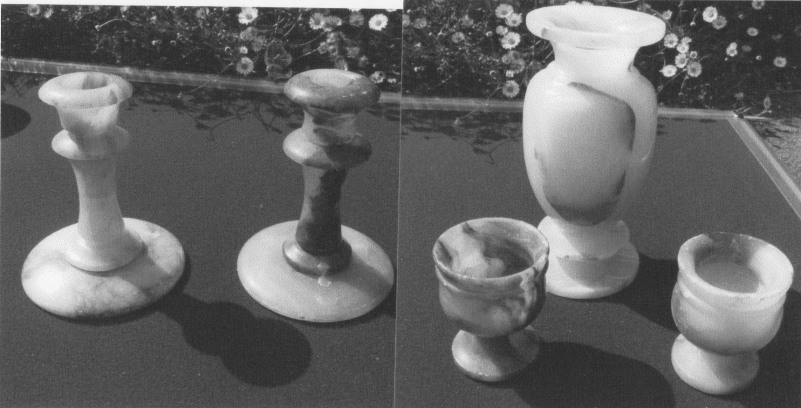 Some examples of Coleorton Bauble Ware 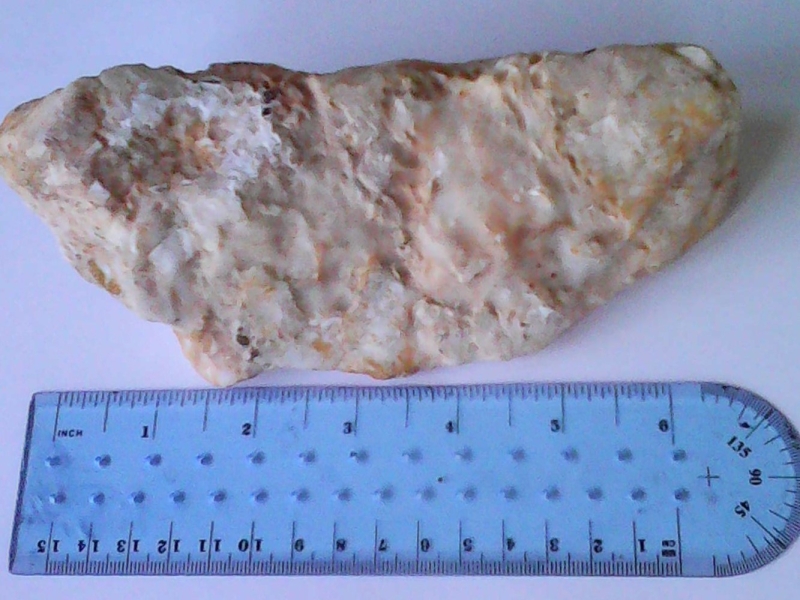 Sample of waste "Spar" recovered near the bauble shop

Perhaps readers have samples of spar ware amongst their treasured family heirlooms or have memories of forebears who worked in the industry which they might like to share with the author on 01530 83570 or through the Coleorton Heritage Group contact details below.

Compiled by: Terry Ward, member of the Coleorton Heritage Group